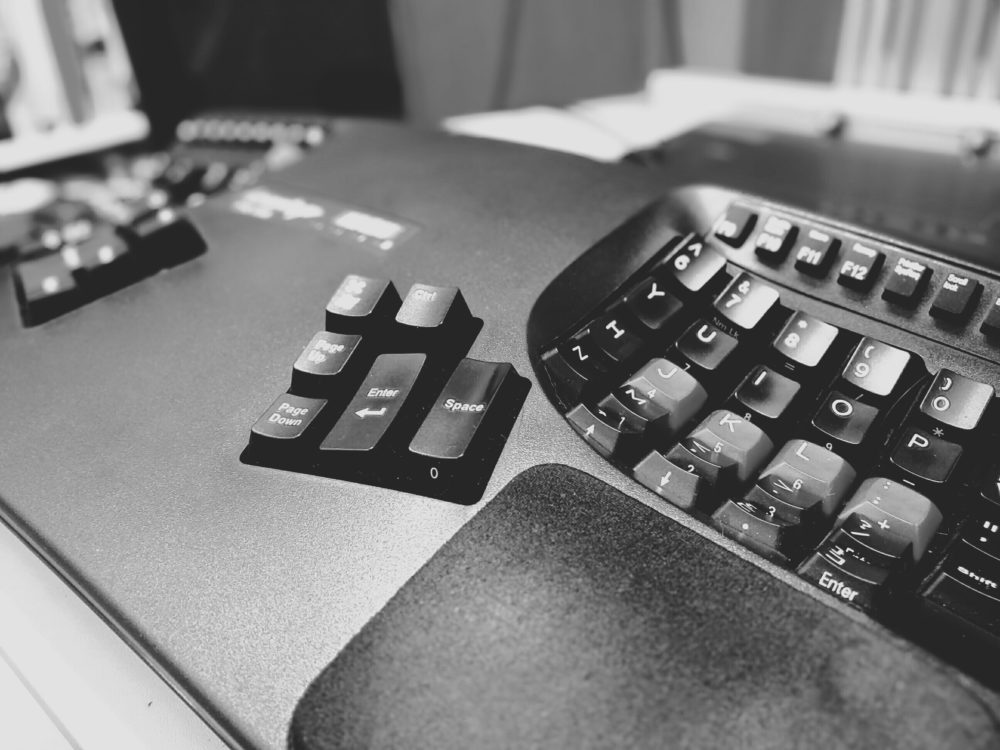 Lately I do the bulk of my coding on a Kinesis Advantage keyboard. Increasingly I'm also making use of the optional 3-switch foot pedal. It's been interesting watching the effect this has on my priorities for editor keybindings.

Every keypress or key-chord has an opportunity cost associated with it. Some are higher than others. Most traditional hacker-oriented tools make certain assumptions about these opportunity costs.

For instance, most tools assume that the opportunity cost for using arrow keys for navigation is extremely high. This is based on the fact that historically, Unix terminals often didn't even possess arrow keys, making their opportunity cost effectively infinite. And even on modern keyboards, they are off in a little remote island, forcing the user to relocate a hand away from the home row and then back, even for the smallest cursor motion.

As a consequence, the traditional “hackers editors” have eschewed arrow key navigation. It's available, but it's not considered the primary navigation center. So for instance, if there are special bindings for navigating by expression or by function, they are not built around the arrow keys.

Editor developers have also traditionally recognized that modifier keys have a high opportunity cost, since on the vast majority of keyboards they involve stretching a pinkie to full extension while keeping the rest of the hand in position to hit a key. Vim is particularly good about avoiding these digit acrobatics. Emacs is less sympathetic, but even Emacs usually emphasizes contiguous sequences of simpler key combos over multiple-modifier contortions.

The Kinesis keyboard addresses both of these keyboard shortcomings. On the Kinesis, you can comfortably use the arrow keys without leaving home position. It's still a slightly higher opportunity cost than using Vim-style home-row navigation, but it's a marginal difference instead of a massive one.

The Kinesis also recognizes what game pad designers have long realized: that the human thumb is an extraordinarily dexterous organ. It is equally at home hitting single keys or mashing down multiple buttons at a time. The Kinesis takes advantage of this fact by organizing modifier keys along with other common non-character keys into “thumb islands”.

And then there's the optional foot pedal. Using a foot pedal with your keyboard feels impossibly geeky at first. Until you use it for a while, and then you start wondering why you didn't recruit your feet for help years ago. It's not like they had anything better to do all this time. Sewing machines have foot pedals. Cars have foot pedals. Airplanes have rudder pedals. Why not computers?

The upshot of all this is that a lot of the work that has gone into hacker editors' keybindings doesn't seem to matter to me as much anymore. For instance, I've been using RubyMine lot lately (for reasons unrelated to keybindings). People ask me if I use Emacs or Vim keybindings for it, and I don't. I use the defaults, for the most part. This includes bindings like Ctrl-Left/Right for wordwise navigation, or Alt-Up/Down for navigating by method. And on the Kinesis, it's fine. It doesn't bother me.

Similarly, it's become less urgent to me to explore Vim-style keybindings in Emacs. Key-chords are now relatively “cheap” in terms of effort and comfort. (Although Spacemacs remains intriguing…)

Obviously, keybindings are the tiniest tip of the iceberg we it comes to the capabilities and advantages of an editor like Vim or Emacs. Please don't think I'm saying navigation keys are the only things that keep me using mature text editing tools. And of course, there's nothing stopping you from using arrow keys to navigate around in Emacs or Vim.

But it does have me thinking about how much of those editors' UX is designed around a lowest-common-denominator teletype keyboard, circa 1960.

There's an argument to be made that this is a good thing. After all, when I take my laptop out on the deck, or to a cafe, I instantly lose all of those Kinesis advantages (heh). Even if I started carrying an Atreus with me, it doesn't have all the keys of a Kinesis. Let alone pedals. Perhaps I should emphasize muscle memory for the subset of comfortable keybindings that are available to me all of the time, instead of the superset that's available in my home office.

But I'm not sure that's such a great idea. A fighter pilot doesn't use a yoke instead of a fly-by-wire joystick just because sometimes she also flies Cessnas.

Maybe it's time we started demanding modern programmer-input devices across the board. Instead of designing input schemes around the limitations of a device that hasn't changed substantially since it was invented for bashing inked hammers into a roll of paper.

UPDATE: It occurred to me that I hadn't even mentioned the “Home/End/PageUp/PageDown” cluster. This is an example of a set of functions that most hacker's editors use some kind of key sequence or combo for, since their location is usually as problematic as that of the arrow keys, if not even more so. But the Kinesis puts these keys in the thumb islands, available without moving your hands or glancing down. A lot of editor tutorials will try to wean you off of these keys along with the arrows. But I'm finding I'm using the dedicated keys more and more (and the alternative keybindings less and less), because I'm no longer paying a price for it. Which is nice, because it means I can use the same muscle memory across all applications.

UPDATE 2: Hi Hacker News! Since I don't feel like wading into the comments over there, I wanted to quickly address a common theme in some of the comments. Namely: the notion that “efficiency” is the only axis that a given keyboard/layout/editor combo might be judged on. If you're a young hacker you may not presently be much concerned about keyboard comfort; but speaking from the ancient and decrepit age of 34: you will be.

May I write to you? I curate a weekly newsletter called BRUNCH. Every Sunday you'll get a short  email with a few handpicked links to articles, videos, and other resources that I think are useful to discerning developers. I'll also keep you updated on what I've been publishing lately.