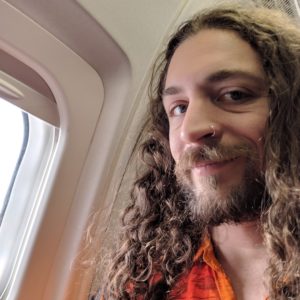 You know, the only problem with writing these is that it immediately shifts me toward a pensive mood. Like, OK, correspondence mode, time to reflect on existential ennui. Of course, that could just be the fact that I’m in an airport after having dropped off my kids in Pennsylvania.

On the other hand (writing this 20 minutes later), it’s the 1st of the year and I just got upgraded to first class, so maybe this is gonna be a good year.

This week I said some things on Twitter about the question “why”. I don’t think this question is the panacea some people think it is.

A while back I realized that every time I ask one of my kids “why did that seem like a good idea?!” I’m not really looking for an answer. I’m just trying to shame them. I’m irritated and I want to make them feel bad by having to stand there and stammer out some rationalization.

Like, this past week I found one of the USB device charging cables with a bend connector. My daughter fessed up to it, and without thinking I said “why would you DO that??”.

Here’s the thing: Rationally, we both know the real answer: there is no “why” most of the time. At best, she barely thought about it and forcing the connector seemed like a good idea at the time.

More often, these kinds of mistake don’t even rise to the level of conscious consideration. Why did you jump off the couch onto me while I was carrying a beer? Because I’m a child and it is in my nature to jump on you, same as it is in a Kangaroo’s nature to lick its arms when it’s hot.

In theory, one justification for asking these kinds of “whys” anyway is as a way to encourage mindfulness. I’m a big fan of mindfulness teachings, a la Thich Nhat Hanh and other teachers. I’m also a big fan of cognitive research a la Thinking, Fast and Slow. It occurred to me last week that in light of what little I understand about neuroscience, constant mindfulness may be an unrealistic goal.

We each get a finite pool of emotional/creative/decision energy per day. What if mindfulness saps that pool? What if the price of high creativity and emotional presence in bursts is “going on autopilot” (“System 1”, for fellow Kahneman nerds) the rest of the time? What if better habits and trained reactions is a more practical goal than constant mindfulness?

At any rate, “why” is not only a problem in early childhood development. I’ve started paying attention to the nascent Resilience Engineering movement, and one thing people in that field are saying is that asking “why” about failures—i.e. doing root cause analysis—is a problematic practice. Just like with young children, the answer you get is often an after-action rationalization. Successful systems are complex systems, and complex systems don’t contain singular root causes. It’s easy to pick a convenient “why” in retrospect. The “why” you arrive at for a given failure may not say anything about the next failure coming down the pipe.

The earbuds you use once a month aren’t charged so you can’t use them. The fire extinguisher you stored under the sink five years ago has rusted shut. The mice have gotten into the spare bag of flour. The canned food you put aside in case of a bad blizzard were eaten by your hungry teenage children and their friends. Your backups stopped backing up three months ago and the warning emails went to an old address. Your scripts for spinning up a new server are out of date.

A fundamental rule of resilient systems is: use it or lose it. Backups, fallbacks, excess capacity, failovers, contingency plans… if you’re not actually using them, they aren’t going to be there when you need them the most.

Enough pontificating, let’s see how I did.

What’s on deck for [the rest of] this week: