It’s been a busy few weeks since I last wrote. Winter has been flickering on and off like an aging fluorescent light bulb. The daffodils have opted to declare an early Spring. 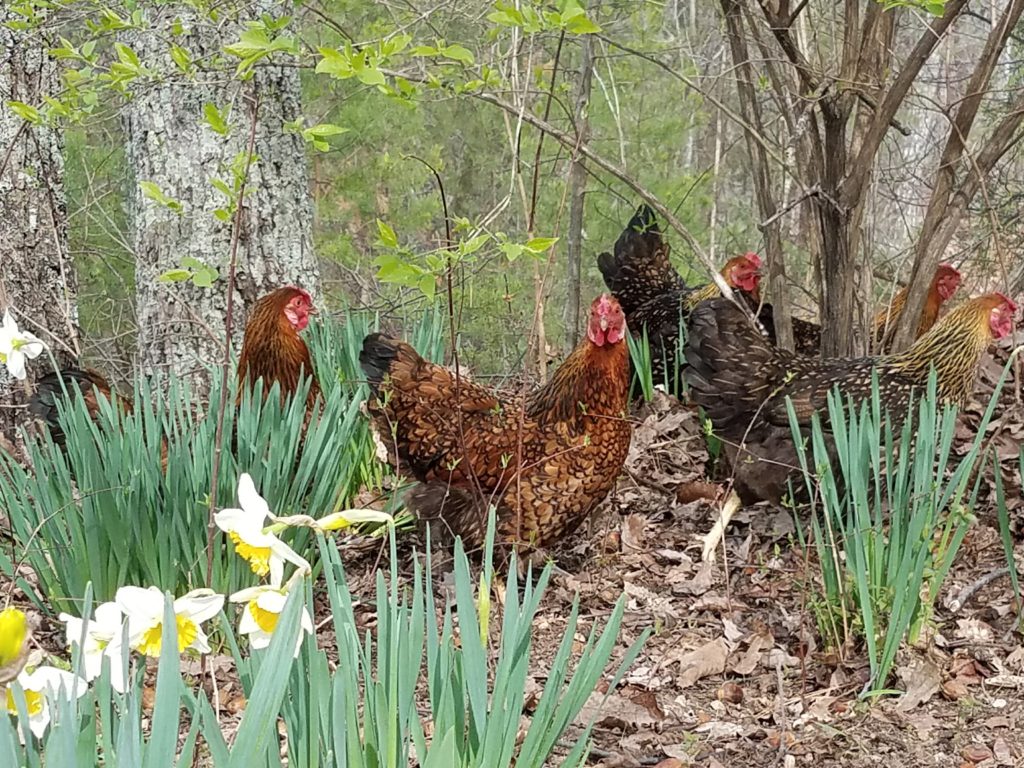 (Pictured: Our escape-artist chickens inspecting the daffodils while taking an unsanctioned leave from their run.)

I realized today that I used to put a lot more quotes from the books I was reading in these newsletters. It’s not that I stopped reading books entirely. But most of my reading lately has been in the genre of business and marketing, and there haven’t been a lot of excerpts that seemed appropriate for this context.

“Fake it ‘till you make it” is a phrase you hear a lot in sales and startup culture. This type of thinking means that at your most vulnerable point — early in your career, at the start of a new venture, when things are tough — instead of asking for help in an authentic way, you must project an image of success that hasn’t materialized yet.

This happens all the time. Why do you think most people buy nice cars, expensive watches, or an even better example: faux expensive watches. It’s all optics. They want to “seem” like a success. Authenticity and vulnerability get left in the dust when you fake it ‘till you make it.

That said, I recognize that the ability to be transparent and vulnerable to the public eye is a privilege unevenly distributed. As an American white dude, there is no puddle full of piranhas waiting to scream “aha! I told you so!” when I falter.

Related, in a way, is this post from the Josh Pigford:

most companies aren’t doing nearly as well as you think they are. It’s easy to look at buzz around a startup or a few high-profile logos thrown on a marketing site and think: “they’re crushing it”.

Well you know what? 90% of the time that startup that you look up to, envy and try to mimic…they are in fact NOT crushing it.

From my admittedly limited and anecdotal experience, I think this observation is pretty universally true.

This Wired article confused me at first:

What if the next big blue-collar job category is already here—and it’s programming? What if we regarded code not as a high-stakes, sexy affair, but the equivalent of skilled work at a Chrysler plant?

It confused me because back when I got started in programming, working at a giant corporation, clock-punching skilled labor is exactly how the work was treated, both by a lot of the developers, as well as by management.

But then it occurred to me that for all they behaved and were treated like cogs in a machine, the developers I knew back then still had to pass through a four-year institution to get in the door. They were white-collar workers laboring in a blue-collar mode.

I fled that world, and in the process I unwittingly became a part of creating an altogether different kind of beast:

While there are far more jobs then there are engineers, we have created a market where the expectation is that engineers spend their own personal time essentially training themselves for their jobs. Because we are so competitive amongst ourselves for glory, money, or whatever it is that drives developers to spend time doing “competitive programming” on one of the many sites that offers that sort of thing, we’ve created a rather demanding market even though it should very much favor us as workers.

Honestly, I think it’s too late for us to take this back – especially now that many more engineers are coming into the market thanks to code schools. This is a monster of our own creation, and the only way to kill it is through some sort of collective action to prevent this sort of “off-hours” competition. That could either be unionization, or regulation of some sort. We could also start caring less about working for “cool” companies with ridiculous perks, but I don’t see any of that really happening. Companies spend a lot of time and money turning their offices into essentially frat houses for their 20-something engineers for a reason – because it works.

For every time I’d tried to “just brush it off,” and for all of the times I’d kept quiet for fear that I wouldn’t be taken seriously, it was an incredible relief to have the people around me step up and share the pain of combating workplace sexism in our home.

It’s one thing to agree intellectually with a strong anti-harassment policy. It’s another to have a concrete picture of what acting on that policy looks like in practice. Rachael Miller has written up a case study.

A well-chosen acronym can lift a concept from obscurity to ubiquity. Think SOLID, DRY, or WYSIWYG. Shane Delamore has written a guide to crafting catchy acronyms:

Traits of a good acronym:

I had a bunch more snippets saved up, but I think going to err on the side of actually getting this out the door. I’ll save the rest for another letter.

This week I’m grateful for the Amazon show Alpha House, which has been providing some thoroughly entertaining distraction during rare unwinding periods. I love me some John Goodman.

Just one self-promotional(-ish) tidbit this time around: I’ve been working with Rails Test Prescriptions author (and friend) Noel Rappin on a new email course about writing faster and more reliable tests. It’s totally free and you can sign up right here.