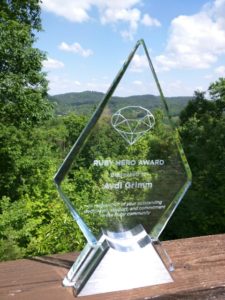 The Ruby Hero awards organizers wisely opt not to have recipients do acceptance speeches. So I thought I’d say a few words here.

When Olivier Lacan presented the awards, he first showed a slide with the photos of all the previous recipients on it. It’s a breathtaking honor to be counted among their number. It’s even more of an honor that I could look at that slide and see the faces of so many people I call friends.

Over the past fifteen years, my career and personal growth have been linked to the growth of the Ruby community. Ruby has given me so many gifts: a way out of soul-crushing government-contracting work. Welcome into a group of inspiring, enthusiastic, and kind practitioners. An entrance into the world of public speaking. Continuous, well-compensated employment that enabled me to support an ever-growing family. And something especially precious: the opportunity to earn the respect of my peers, as well as the respect and friendship of many of the people I consider personal heroes.

In a sense I feel that I’ve been gifted with my own personal Ruby Hero awards on a daily basis for years now. The constant stream of supportive tweets, incredibly gracious emails, postcards, and kind words at conferences have encouraged, sustained, and humbled me. I make no secret of the truth that I frequently suffer depression and overwhelm. I’ve lost count of the times that an appreciative note has arrived during the depths of discouragement, lifting my spirits and strengthening my resolve to always be better.

The truth is, I struggle constantly with the fear that I haven’t earned this adulation. The facts:

When I look at the concrete contributions of other Ruby heroes, I question what it is I actually do for this community. Mostly I just seem to run my mouth. Sometimes it seems like I’ve taken more than I’ve given.

I’m deeply indebted to my original ruby heroes, people like Dave Thomas, the late Jim Weirich, Chad Fowler, Reg Braithwaite, James Gray, Dan Kubb, and too many others to name. Thanks for inspiring me, teaching me, and then later being nice to me as I got to know you all in person.

And, of course, I am grateful to my wife Stacey, for putting up with and tirelessly supporting all the globetrotting, career upheaval, and long hours.

Ultimately, whenever I receive appreciation in any form, it says one thing to me: now, do even better. I intend to do just that.