The more I read, the more I realized that what I and possibly others had been calling “Presenter” was really something a bit different from the idea that Jay Fields first introduced under that name in 2006, and subsequently expanded on. Originally, Presenter was fundamentally an aggregation pattern. The canonical example is a report: you have a view in which data from numerous models is brought together into a single summary view. Rather than have a controller instantiate and/or query numerous models, you group them all into a Presenter object which represents that logical “screen” as a single aggregate object.

I won’t bore you with the details of my research. If you’re curious, here’s my Presenter reading list from OoR:

By contrast, what I had been using on several projects, and was eager to show people in the book, was more of a presentational decorator. Now I had a quandary: I had already drafted a whole section on them, but now I wasn’t sure what to call them. “Decorator” was too generic for the very specific kind of decorator I was describing. “Presentational decorator” didn’t exactly roll off the tongue.

The presentational pattern I came to describe as an “exhibit” in OoR has the following trademarks:

The more I thought about it, the clearer it seemed that while this idea wasn’t new–a number of people were already using similar constructs–it had sufficient unique traits to perhaps warrant a name of its own. And I was convinced that continuing to call it a “presenter” would just make things needlessly confusing. Hence, the term “exhibit” was born.

Since I released the book, the Exhibit idea seems to have struck a chord. I get a lot of feedback from people who say they are happily using it in their own projects. In fact, I get more positive feedback about Exhibits than about anything else in the book. 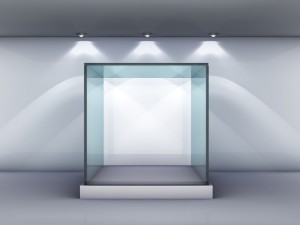 While anyone can roll their own Exhibits–that’s the point of a pattern, after all–I fully intended to release the basic Exhibit framework demonstrated in the OoR source code as open-source code. Today, thanks once again to the diligent curation of Sammy Larbi, I’m happy to announce that this code is available as the display_case gem. Of course, it’s also available on GitHub as well.

Why call it “display_case” instead of “exhibit”? Simply because it’s a pet peeve of mine to name libraries after patterns. It makes discussing them confusing–are we talking about the general pattern, or a specific library?

This post has been long enough, so I won’t go into usage here. You can read all about how to use the gem on the homepage. And if you have any questions or suggestions, please do join the Objects on Rails public discussion list!